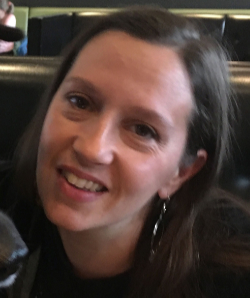 My connection to spirits goes back to early childhood. The Sun was my confidant and friend. Whenever I felt the need to pray, Sun was listening. My world was filled with so-called "imaginary" friends, animals, and people. It is clear that my allies have been present in my life since the beginning. At 17, I had a terrifying premonitory dream that came true and I deliberately shut down my connection to spirit. A decade of depression and feeling lost followed. Then in my early twenties I had the great fortune to be introduced to shamanism, which helped me find my way again. I feel that shamanism saved my life.

In 2008, I took the FSS Basic Workshop: The Way of the Shaman, and have been on an amazing and fulfilling path ever since. Since this work changed my life so powerfully, I wanted to share it with everyone around me. I began by sponsoring FSS workshops in my local area, Montreal, in January 2014. Shortly thereafter I began doing the live translation into English for the FSS workshops taught in French. I became very involved with and committed to our shamanic community in Montreal, Quebec, which continues today and is growing and prospering in both languages.

I completed the FSS Three Year Program of Advanced Initiations in Shamanism and Shamanic Healing and the Two Week Shamanic Healing Intensive, and have assisted former FSS faculty members in numerous weekend trainings, including providing French-English translation. I have an active shamanic healing practice as well.

One of the things that has helped me most in my teaching for the Foundation is my background in theater and stagecraft. I also taught pottery classes to children for 20 years. Since 2013, I have been a self-employed artisan, and I currently work with the creation of Sacred Art and Song for healing and personal transformation. All of this helps nourish and inspire my dedication to sharing the principles and practices of core shamanism, Dr. Michael Harner's legacy to the world.