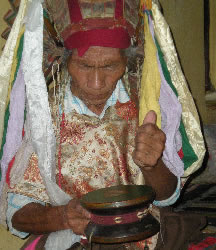 We are saddened to report that Pau Pasang Rhichoe has passed on (circa March 20, 2012). Pau Rhichoe was a gentle healing soul and he will be missed, both for his wisdom and for the healing he provided to those at the refugee camp. In September 2013, the third Lhapa, Pau Nyima Dhondup, passed. Former FSS Living Treasure Pau Karma Wangchuk passed in 2008.

Pau Pasang Rhichoe is a Tibetan Lhapa (shaman) in his seventies, living in a refugee camp in Nepal. He practices a shamanic tradition that is passed down through the maternal bloodline from grandfather to grandson or from uncle to nephew.

He was spontaneously chosen to continue his familys healing tradition when he entered puberty and started having the visual and auditory spiritual experiences that marked his fate to be a Lhapa. After apprenticing and making pilgrimages to holy sites to acquire power, he began treating patients.

All Lhapas practice a similar healing tradition, with the main difference being the deities in which they take refuge. When patients come for treatment, an elaborate altar is constructed and the Lhapa dons a costume and headdress. They sing and call in their helping deities and once these have all gathered in a mirror on the altar, the deity who will do the healing work embodies the Lhapaat which point the Lhapa jumps to his feet and dances.

Treatments can include sucking the illness out of the body with actual objects being spit out to show the patient the source of their illness, a soul retrieval ceremony (Lha Kuck), a ceremony to send a deceased soul who is stuck into the afterlife (Shim pu) or a ritual to cut the misfortune that has caused child after child in a family to die (Rhi). They are famous for curing rabies. At the end of the treatment, when the deity leaves and the Lhapa comes back to himself, the headdress falls off, signaling the end of the ceremony. Each treatment can last for hours and is run by a mediator who speaks with the deity on behalf of the patient.

Pau Rhichoe performs elaborate rituals that include sucking out illness, restoring lost soul parts, removing obstacles and doing divinations on behalf of all who come for treatments. View a clip of Pau Rhichoe in the Living Treasures of Shamanism video (also on the ShamanicStudies channel).