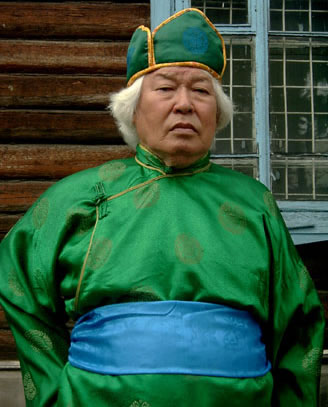 The Foundation has had a long relationship with the esteemed Dr. Professor Mongush B. Kenin-Lopsan. He was present at the Foundation's first expedition to Tuva in 1993 (read the article; view the video clip), and at three subsequent expeditions. In 1994, he was named by the Foundation as a Living Treasure of Shamanism for his work, at great personal risk, in preserving shamanism in his country under the Soviets.

The Professor is a writer, scholar, folklorist, ethnographer-shamanologist, a doctor of historical studies, and a shaman. He founded the Dungur (Drum) Shaman Society to promote Tuvan shamanism and preserve it for future generations. He is the author of many books and papers which advance Tuvan literature and language. Professor Kenin-Lopsan has been collecting myths, legends and songs in connection with Tuvan shamanism for more than 50 years, has traveled throughout Tuva, met with elder shamans, and was friends with people who remembered the old Tuvan customs. For more about the Professor, see this article from Tuva-Online, written on the occasion of his 86th birthday in April 2011.

Professor Kenin-Lopsan's book Shamanic Myths of Tuva was recently published in German by the FSS Europe through the efforts of Director Paul Uccusic.

Mongush Borakhovitch Kenin-Lopsan was born April 10, 1925 in the small village of Chash-Tal in Western Tuva. He was born into the family of Bora Khöö (Hoo) Mongush, among them herders, shepherds, smiths, singers, storytellers and shamans. His parents were storytellers. His maternal grandmother, Kuular Khandizhap, was a great shamaness, who was detained in a concentration camp under Stalin and died shortly after she was released after Stalins death. There are several stories about her in Kenin-Lopsans writings.

Mongush Borakhovitch was an excellent pupil; his first publication in a local newspaper came out when he was thirteen. He studied in Chadan and Kyzyl in Tuva and in Leningrad. After finishing his studies in oriental philology and history, he became editor of the Tuvan literary publishing house. In 1956 his first book of poems The Great Road appeared. He wrote more than 50 books  novels, ballads, short stories and even translated Russian literature into Tuvan. He also taught the Tuvan language and literature in several colleges in Kyzyl.

Prof. Kenin-Lopsan did fundamental research on Tuvan shamanism, which was forbidden in the fifties and sixties under the Soviet regime. Most important is his dissertation about the structure of the kamlanie, the shamanic séance, including: starting the preparation of the site, the invocation of the spirit helpers, when the shaman/shamaness determines the cause of the illness and predicts the future; and the passing of the sickness and the improvement of the client. He published a study about the classification of shamans, served as an archaeologist, as a researcher in the Kyzyl National Museum and as a collector of shamanic objects (now part of the collection in the museum).

This treasure is compiled in two books Algyshi of Tuvan Shamans (Kyzyl 1995) and Myths of Tuvan Shamans (Kyzyl 2002), both in Tuvan with translation by Kenin-Lopsan into Russian. Hungarian folklorist Dr. Mihály Hoppál introduced parts of both books in English, Shamanic Songs and Myths of Tuva, published 1997 as ISTOR book # 7, together with a short history of Tuvan shamanism, scientific commentary, and with drawings of shamanic objects by the Tuvan artist Valeri Yelizarov.

The Swedish publisher Anna Kjellin, working with Aldynai Seden-Khuurak, after nine years of work published an English version of the algyshi in 2010, Calling the Bear Spirit, providing a remarkable selection of the songs.

The German translation Shamanic Myths of Tuva (Schamanengeschichten aus Tuwa), edited by Paul Uccusic, is the complete collection of all the myths provided originally in Myths of Tuvan Shamans, with photos and illustrations by Alexandra Uccusic.