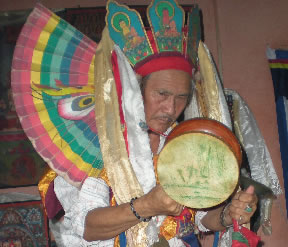 It is with great sadness that we report that Pau Nyima Dhondup passed on (circa September 19, 2013). Pau Nyima was a wise and dedicated healer, the last of the three Tibetan shamans in the refugee camp in Nepal. With Pau Nyima's passing, there are no longer any Tibetan shamans practicing in the camp. Former Living Treasure Pau Pasang Rhichoe passed in March 2012 and former FSS Living Treasure Pau Karma Wangchuk in 2008.

Pau Nyima Dhondup is a Tibetan Lhapa (shaman) in his sixties, living in a refugee camp in Nepal.

He practices a shamanic tradition that is passed down through the maternal bloodline from grandfather to grandson or from uncle to nephew. He was spontaneously chosen to continue his familys healing tradition when he entered puberty and started having the visual and auditory experiences that marked his fate to be a Lhapa. At the time of Pau Nyimas initiation, China was invading Tibet, so he spent the next ten years having spiritual experiences with no one to guide him. Finally, when he was in his late twenties, he was able to apprentice with both Pau Karma Wangchuk and Pau Pasang Rhichoe.

All Lhapas practice a similar healing tradition, with the main difference being the deities in which they take refuge. When patients come for treatment, an elaborate altar is constructed and the Lhapa dons a costume and headdress. They sing and call in their helping deities and once these have all gathered in a mirror on their altar, the deity who will do the healing work embodies the Lhapaat which point the Lhapa jumps to his feet and dances.

Treatments can include sucking the illness out of the body with actual objects being spit out to show the patient the source of their illness, a soul retrieval ceremony (Lha Kuck), a ceremony to send a deceased soul who is stuck into the afterlife (Shim pu) or a ritual to cut the misfortune that has caused child after child in a family to die (Rhi). They are famous for curing rabies. At the end of the treatment, when the deity leaves and the Lhapa comes back to himself, the headdress falls off, signaling the end of the ceremony. Each treatment can last for hours and is run by a mediator who speaks with the deity on behalf of the patient.

Pau Dhondup's practice consists of people from the camp, Nepalis, and Westerners who visit. He may treat more than one person at a time.

View a clip of Pau Dhondup in the Living Treasures of Shamanism video (also on the ShamanicStudies channel).